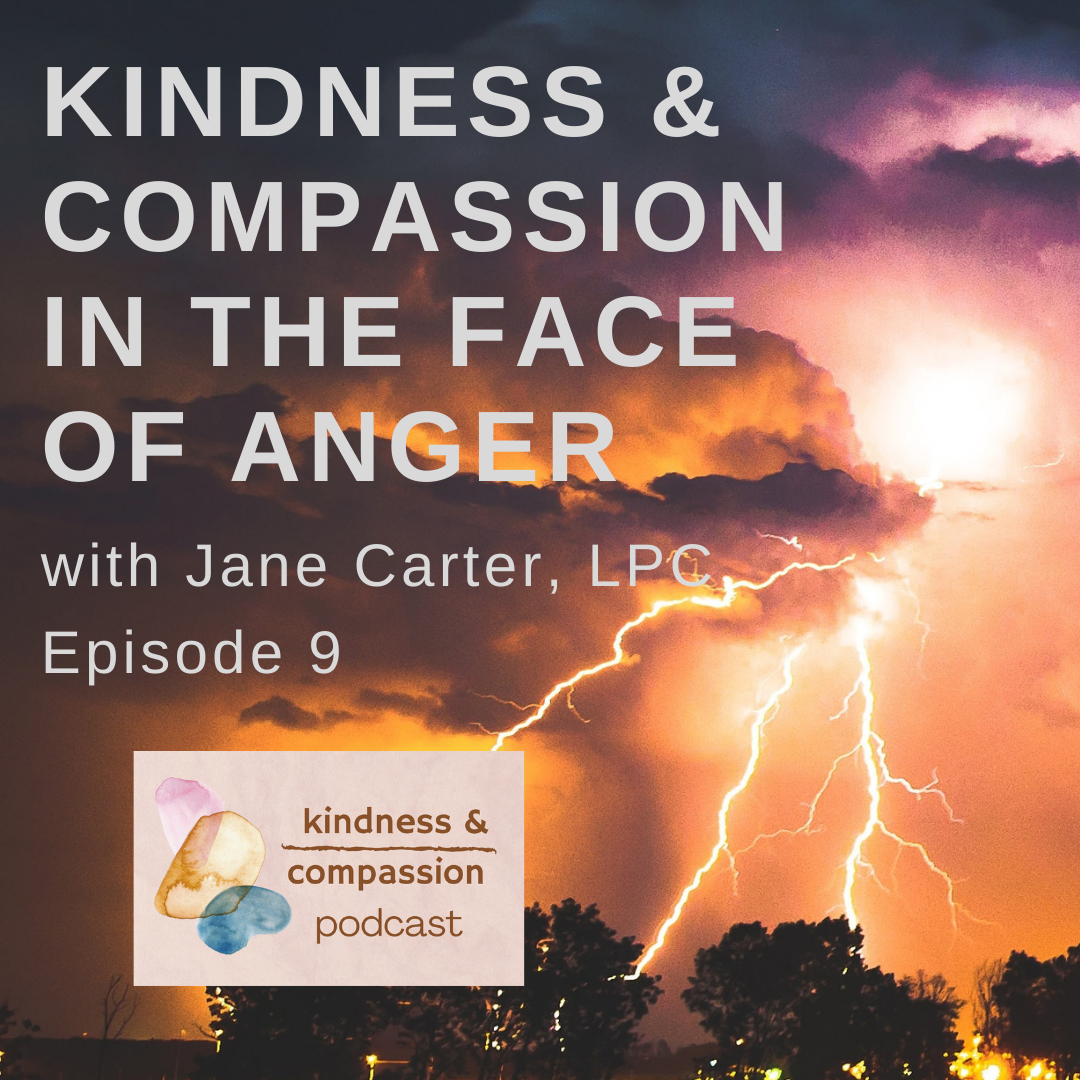 Jane says, “As a therapist, business coach, and life coach, I love helping people navigate the path to achieving their goals for a meaningful life. I apply these principles in my own life in the mountains of Asheville, NC, where I’m an outdoorswoman, world-traveler, dog-mama, food-and-wine lover, reader, and coffee-shop connoisseur. (I’m also known for making up great puns on the fly).”

How do we handle anger in a genuine way without turning into a jerk?

One concept that is important to understand is the difference between anger and rage. Anger is actually a useful emotion in that it is a signal for when something is not right or amiss. Anger serves to protect us from harm. Rage on the other hand is when anger runs unchecked and does harm to others. Anger can be a “check engine” light and being able to say, something is not right here. It indicates that a boundary is being violated. Jane says, “anger is a tool that God has given us to protect ourselves and also let us know when things are just not right”.

Anger can be a very good motivator for change. Jane gives the example of John Lewis and the civil rights movement. How we respond with love even when people are greeted with anger and disdain. The key is to be able to look beyond our own fear and see the humanity of others. That even though we might not agree with the other we see the hurt and fear of others.

It is possible to be angry with someone without it being an end to the relationship. Jane mentions that sometimes we get angry because we care about the other person. She says, “indifference is not love”. Anger has a way of signaling us that something is not right in the relationship. And we do ourselves a disservice by pretending that everything is okay.

The key to handling anger with kindness is slowing things down and being curious about what is happening with the other person.

Jane shares listening to a radio show where people would call in and talk about what they were angry about. And the radio host would commemorate by saying “that’s legit beef” or “that’s not legit beef”. There are times when anger comes because of “legit beef”. And in some of those situations, anger is the appropriate emotion. So don’t talk yourself out of your “legit beef”, but instead allow yourself to be curious about that.

Jane tells a story about walking down the road and a truck coming by really fast and close to her. Jane shares that her first reaction was to yell and curse at the guy driving the truck. And then almost instinctively, when she recognized her own anger, was to say “bless his heart” (it’s a southern saying…). And the challenge then becomes, can we truly mean “bless their heart” as an act of compassion. That whatever the other person is experiencing, we can have compassion for them. The key to showing kindness and compassion when faced with anger is to be able to continue to see the other person as a child of God worthy of our love and kindness. We slow things down and take a minute to acknowledge the other’s humanity.

Acknowledge and Embrace Your Anger

Jane reminds us that when dealing with anger we shouldn’t try to always get rid of the anger, but to acknowledge it and learn to slow things down enough to get curious with what is happening. Then be able to say what we need in that moment and be able to connect to the other person’s humanity.

Jane shares that we don’t always succeed in dealing with our anger well, but the key again is being able to acknowledge the anger and slow things down.

Another key to dealing with anger is recognizing the dichotomy of being angry with someone and still being engaged with them. Again, it is possible to have a mixture of emotions, in other words, “both and” instead of just “either or”. The key to being able to do this well is in treating people with kindness and the work of reconciliation. We might not always see things in the same way, but we can stay engaged and be willing to listen and hear the other person’s point of view.

“Rage shames, but anger is a tool of connection”

We can share our anger with another and this has the potential of creating emotional intimacy. To share how we have been hurt or feel afraid is an act of vulnerability. And this is what creates connection and intimacy.

Jane reminds us too, that we shouldn’t turn our anger inward or try to shut it down. That is a form of inward rage and is self serving. Jane said, “that some of the kindest moments from friends has been when they have been willing to confront me”. It was an invitation to intimacy and closeness for them to be able to share what was bothering them.

In many ways being able to share our anger with others is an act of kindness that requires a lot of courage. When we share our anger in healthy ways it gives us the ability to connect at a much deeper level. It also is healing and reconciling.

However, in situations where it is really not safe to share your anger, it can be useful to hold back. People that have grown up in traumatic situations, such as abusive relationships, turning anger inward becomes a survival tool. But this is not sustainable and a person really should work through this with the help of a professional.

Being polite is not always the kind thing to do. There are times when we need to call things out and speak truth to things that are not right. In many ways, this was what Jesus taught and was the point of his ministry.

“Jesus came to comfort the afflicted and afflict the comfortable”
Jane speaks of her ongoing work of reconciliation around racism. Jane reminds us that being polite has been used by white people to maintain oppression. In that we need to speak truth to injustice and that is not always pretty. And when we are willing to disrupt things, that is an act of tough love. It is an invitation to compassion.

When we dehumanize others, we not only hurt them, but we hurt ourselves. We have learned this from veterans who have been in war situations where they have had to harm others. Their harm to others creates a moral injury to themselves. It goes against their core values of seeing others as human beings.

Jane talks about Brene Brown’s work and the importance of boundaries. Jane says that when we have good boundaries with ourselves and others, it is an act of compassion. It takes away the fear and allows us to have more freedom and autonomy. “I can have the space to have more compassion because I can say no”.

As counterintuitive as it sounds, the emotion of anger can be a tool for showing kindness and compassion. Anger is a signal within ourselves that something is amiss. When we are hurt or afraid we experience anger. But anger can also be a prompt for us to call out things that are not right. In that when boundaries are crossed, anger can help us to confront what is wrong. And when we handle and express our anger in healthy ways, it is a way to connect and reconcile with others. It is an act of kindness and compassion to be vulnerable enough to name what is wrong and allow people to come close.

Gordon (00:00):
Well, hello everyone. And welcome again to the podcast. And I'm so glad and thrilled for you all to get to hear from my good friend and colleague Jane Carter. Jane, welcome to the podcast.
Jane (00:14):
Thank you. I'm so happy to be here, Gordon.
Gordon (00:16):
Yes. Uh, Jane and I have known each other for a good, good bit of time now. And we've had all these divergent, uh, our, our paths have crossed in many interesting ways. First, I guess, kind of per professionally, just, uh, we had got Jane had hosted a conference in Asheville, North Carolina, the brew, your practice, uh, conference or workshop or whatever we, we, we call that thing. Uh, but also I, we found out through our conversations that we are, are both Episcopalian and, um, have a lot of church crossover as well. So Jane, I'm gonna stop talking about you and let you tell a little bit more about yourself and of your work as a therapist and a coach and all of that sort of thing.
Jane (01:05):
Yeah. Okay. Um, gosh, where to start. I'll, I'll try to be brief cuz I'm a rambler, but um, I, I love living in the mountains. Um, I love where I am. I love that you're nearby mm-hmm