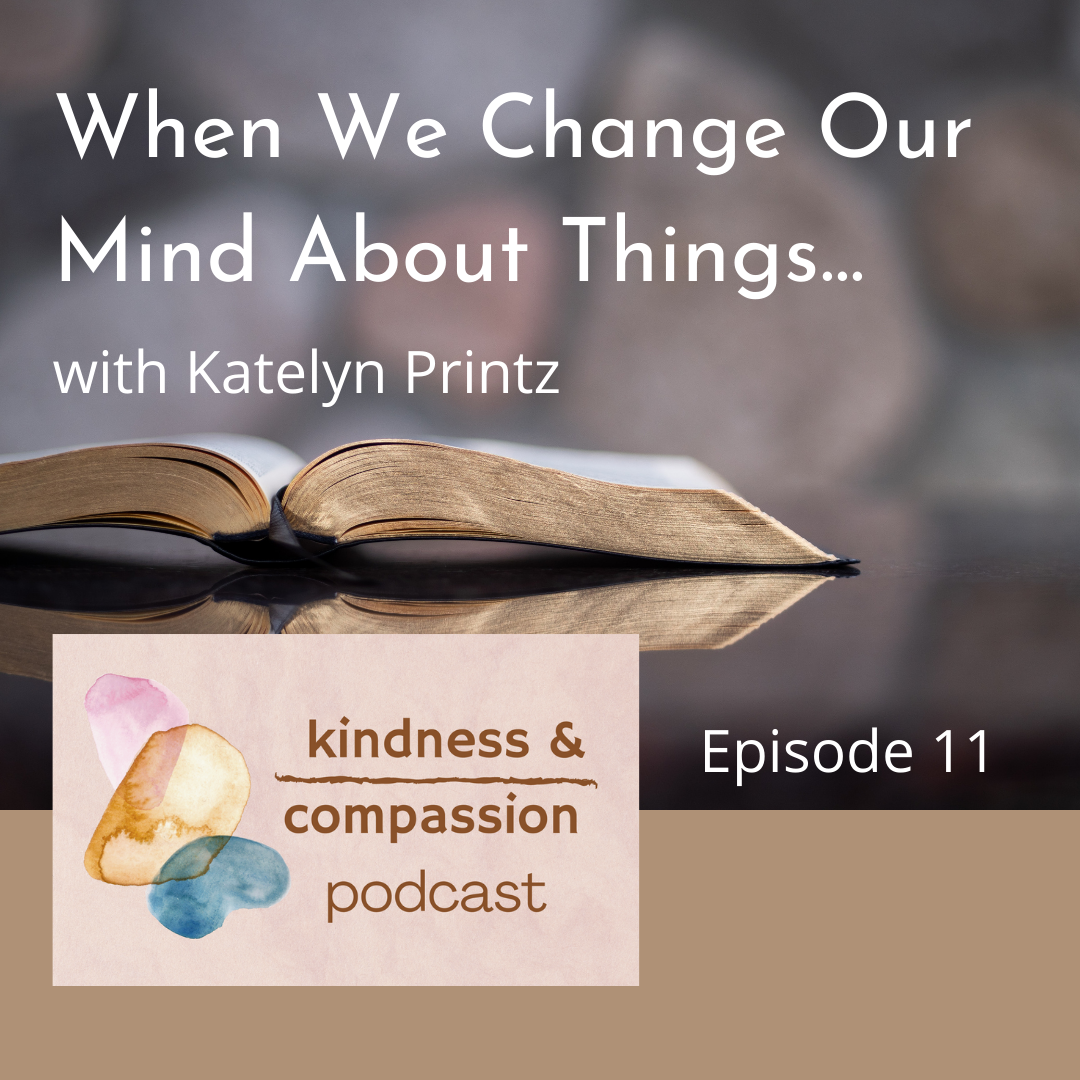 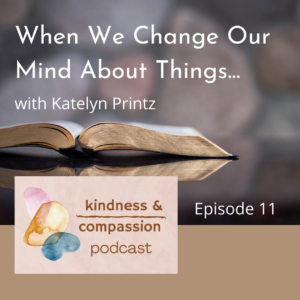 In this episode, Katelyn Printz joins us to talk about the process she went through in changing her mind about some things. Katelyn shares her story about growing up with some fairly narrow conservative Christian views.  As an undergraduate in college, Katlyn’s eyes were opened up to various ways of thinking, allowing her to reconsider some of the opinions she had as a child. Katelyn speaks about the importance of allowing your faith to be a continuous process as you grow and learn. Tune in as we chat about the many ways to love and worship and why it’s critical to have kindness and compassion for yourself and others as they make changes to their faith and beliefs.

Katelyn is a middle school teacher who has spent the past 5 years teaching science and Bible/Theology classes. She grew up in and attended seminary in a very conservation denomination that did not look fondly on her wrestling with big questions around racism, LGBTQ theology, women in leadership, ect. This led to many months of study and deconstruction of old beliefs. Her process eventually brought her to the Episcopal Church. Leaving her childhood church community has resulted in many difficult conversations with family and friends who disagree with where she has landed. The process of reckoning with hard questions and being pressed towards hard conversations has pushed her to spend lots of time thinking about how to disagree with compassion and kindness.  Katelyn lives in Kingsport, TN with her old rescue dog, Buddy.

Katelyn grew up in a very conservative Christian denomination; views were narrow in what was permissible or not permissible. She found a lot of safety knowing where the boundary lines were for right and wrong. However, Katlyn was always curious and had a lot of questions about her ethics and morals. However, she was afraid to be as straightforward about all her questions. Katlyn went to a Christian university, where she was exposed to liturgical-style things for the first time. At university, Katlyn realized that there are Christian people who think differently than the minimal perspective that she grew up with.

Permitting Yourself To Be Patient When It Comes To Faith

Before Katelyn has a conversation with someone else, she has had to learn how to permit herself not to understand something fully. She permits herself to wrestle with her thoughts and allows faith to be a continuous process. You don’t need to have airtight boxes when it comes to faith; this can be a challenging idea to understand. Many people struggle to give themselves grace and compassion. Remember to be patient with yourself as you read and learn. It can be exhausting to undo the beliefs that you have held since childhood. Overall, give yourself permission to have a conversation and say, “I don’t know.”

There Are Many Ways To Love and Worship God

Katelyn was working at a bush hospital in Kenya during college. She enjoyed watching people love and worship God in a way that was just very different from her own. At a Kenyan church, there is a lot of exuberant, joyful dancing. Plus, there is a lot more openness to the supernatural. The activity of angelic or demonic forces is just more prominent in Kenya versus the United States. Watching other people worship with such explosive joy was very beautiful, especially when compared to a formal religious ceremony in America.

Working on Kindness and Compassion With Yourself and With Others

Katelyn is working on showing herself kindness and compassion. There are still a lot of aspects of her theology that she is rethinking. Have compassion for yourself; you don’t need everything figured out. Plus, you don’t need to act like you know exactly what you’re doing. Also, Katelyn makes sure to have kindness and compassion for the people around her. Find the humanity in every person. It’s critical to be kind about accepting change and how slow or fast others are willing to change. Lastly, Katelyn knows when to pull back. If she has an unhealthy conversation, she knows when to stop engaging.

Ultimately, kindness and compassion comes to fruition by being curious about people.  As Katelyn points out, when we allow ourselves to get curious rather than defensive, we can have a discourse that is based on compassion.  We might not always agree with another’s point of view, but we can still be curious.  And you never know… it might just lead to changing you mind about some things…

Gordon (00:00):
Hello, everyone. And welcome again to the podcast. And I'm so glad for you to get to know Caitlin prince Caitlin. Welcome to the podcast.
Katelyn (00:08):
Thank you. B, I'm really excited to be here.
Gordon (00:11):
Yes, yes. And I've gotten to know Caitlin over the last few years, really again, through, through my church context and just conversations we've had about theology and just, um, a lot of the different changes in life that come along and in getting to know Caitlin, I know that she's been on this pretty fascinating journey just with changing her mind about things and changing kind of her view of things, particularly theological, but, um, Caitlin welcome and tell, tell folks a little bit more about yourself and how you've landed, where you've landed.
Katelyn (00:50):
Okay. Well, I grew up in a very conservative, um, Christian denomination, um, very, I guess, narrow in what was viewed as, um, permissible or not permissible. And I just soaked it all up. I think I was a little, um, I rule follower and I found a lot of safety in knowing where the boundary lines were and what was right and what was wrong or what I thought was right and wrong. Mm-hmm,